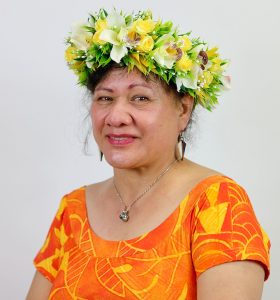 Manava trained as a primary school teacher in Rarotonga. She spent several years teaching before emigrating to New Zealand in 1986.

Initially, she worked for the New Zealand Defence Force before returning to the classroom following the birth of her second child in 1989. Manava completed an intensive pathway to teaching while serving the Cook Islands community as a youth leader in West Auckland. She also sat on The Fono Board of Trustees in the 1990s.

Manava is a passionate supporter of the Cook Islands community and has been involved in several high-profile projects. These include the stop smoking promotion and many Covid vaccine drive-throughs.

In 2021, Manava joined the Pacific Forum’s Covid meetings and was recently appointed as Chair of Te Opunga Ra, an organisation dedicated to providing Cook Islanders with a collective voice.

Life outside work is dedicated to enjoying family time and church activities. Furthermore, Manava has just completed a Postgraduate Diploma in Education and is about to embark on a master’s degree.